US Silver Production Lowest In 70 Years 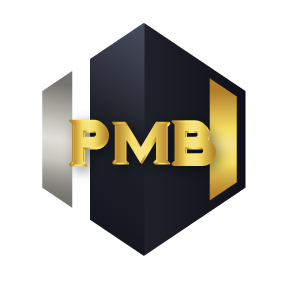 Many an article have been written and many theories have been floated to explain why the world stock markets are so high.

Today I am presenting my own theory why stock markets are so high and why gold and silver investors should sit upright and take serious notice.

In previous articles I have already alluded to signs that the markets are too high. The Schiller P/E ratio as well as the Dow Jones margin debt are two examples. It is also a fact that investment in general has been declining for the last two years as can be seen from the graph below. The exception is the red line which represents exclusive buyers. 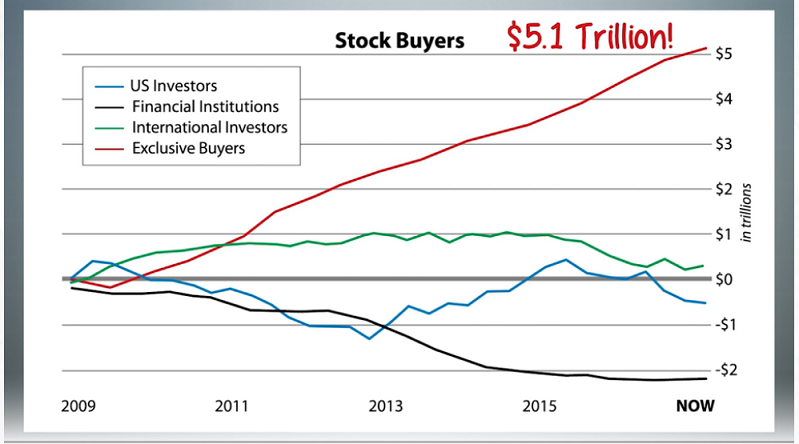 Just who are these exclusive buyers?

The red line or exclusive buyers, represent companies that are buying back their own shares. This practice is called share buybacks and a staggering amount of $51.1 trillion have been used to buy back their own stock. This is legal and allowed under a rule call 10b – 18. Below are some numbers of only the biggest US company buybacks. Many smaller companies are doing the same thing. 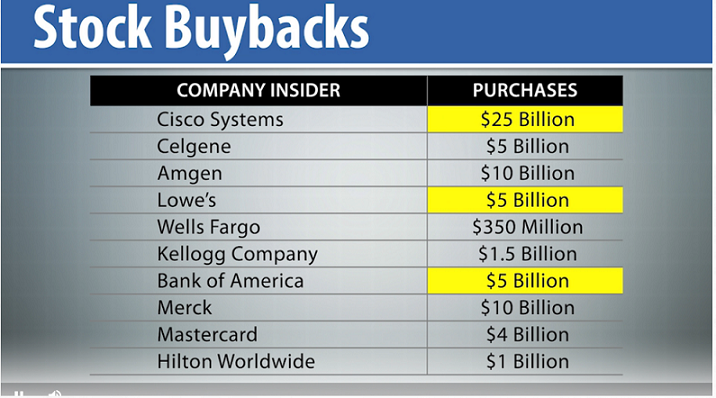 Now let us mere mortals think this thru. If a company is buying its own shares, the value of the shares are not determined by the market, but rather by the company who is buying its own shares! Does this seem fair to you? To me it looks like manipulation short and sweet. Oh yes, I forgot to mention that the directors bonus scheme is dependent on the price of the shares. Aaaah ….. now it makes sense!

It is therefore clear that the higher share prices are not driven by new products, better service offering or improved infra structure. Folks, the shocking fact is that company profits are used to buy back these shares and if there is not enough money, the directors go and borrow more money. That is the reason why corporate debt in the US and the UK is at all time highs. 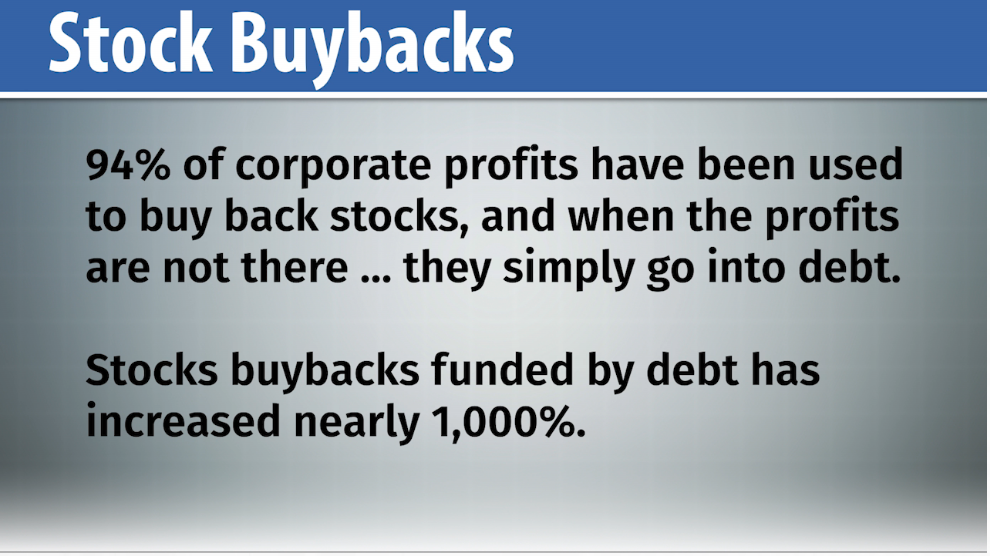 By the way, one of the biggest reasons the stock markets plunged 90% in 1929 was, you guessed it, stock buybacks!

There are currently calls going out to declare stock buybacks illegal as can be seen from this article by Rita McGrath.

If company buybacks are banned, there will not be anymore buyers left and stocks will come tumbling down fast. It is no wonder that Warren Buffet has allocated $116 billion to a cash fund and plans to increase it to $150 billion soon. What does Buffet know that we do not know?

While reading this you might be thinking, what does this have to do with me? Ask your self, if the markets start to crash, where will the money go?

The best way to protect your wealth against the coming financial disaster is to stock up on physical gold and silver. Buy gold and silver bars now before it is too late!

Why Stock Markets Are High And Silver Is Low